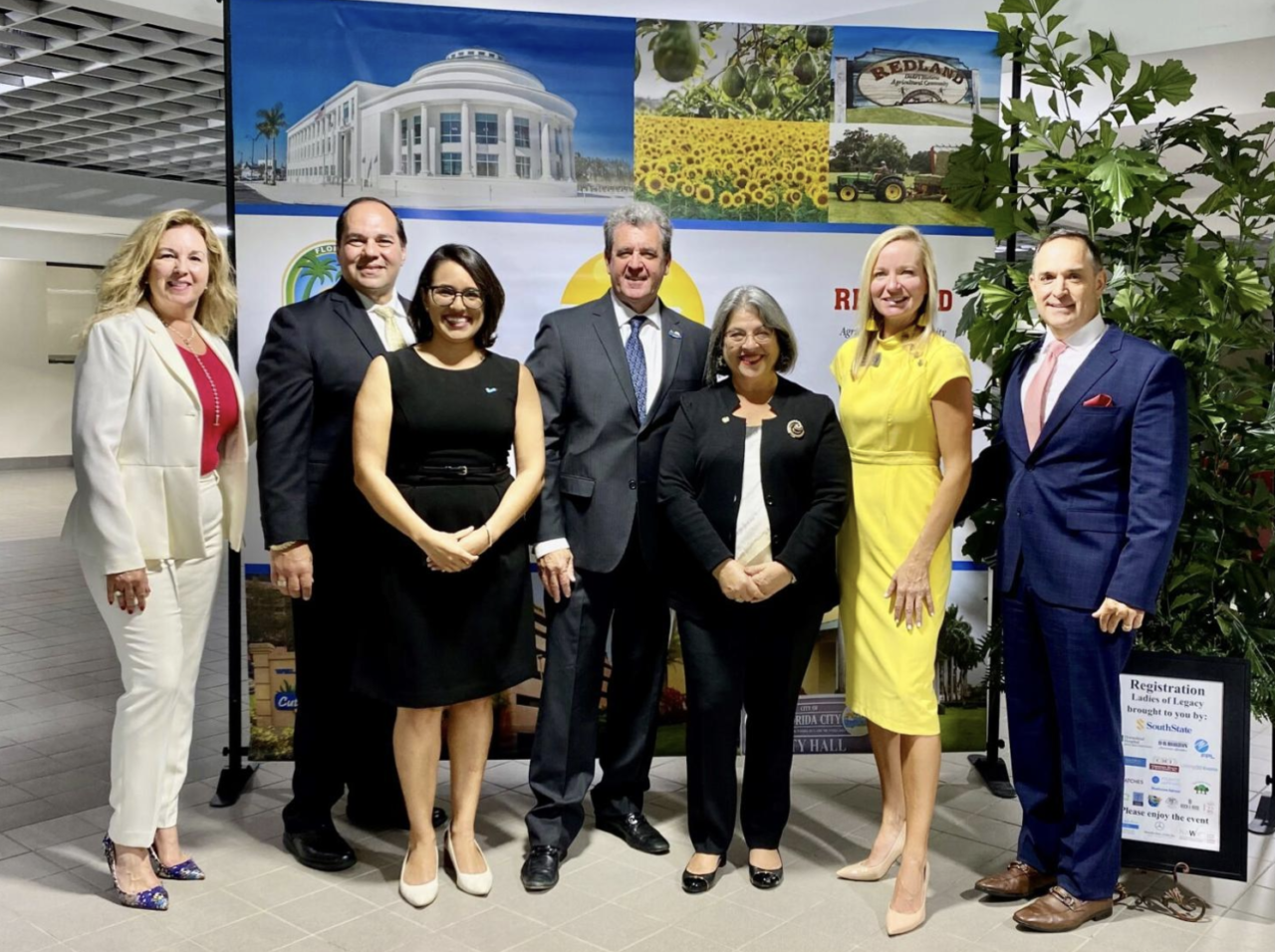 Cutler Bay Mayor Tim Meerbott welcomed the crowd at the Ladies of Legacy Leadership Luncheon, Thursday, June 9, 2022, held at Mercedes-Benz of Cutler Bay. The South Dade Chamber of Commerce (SDCC) event was in partnership with the National Association of Women in Construction (NAWIC), Miami Chapter. He commented the title should perhaps instead be, “Ladies of Power”.

Indeed, one passage from the program was, “Ladies of Legacy is a celebration of leaders who have made a difference in their communities, while building their careers and nurturing their families.” Before introducing Mayor Meerbott, Lucia Soria, SDCC Chair and NAWIC Director, opened the session noting, “We are celebrating women not only in construction, but in business, politics, and non-profits.”

In thanking everyone and expressing special appreciation for military members present, she remarked how all the attendees set a great example in creating legacies. She related some of her own journey through leadership. She was raised in a family with high expectations that at times seemed almost overwhelming. Shyness as a child gave way as the family traveled and she learned more about the world and different cultures.

In forty years advocating for programs to help South Florida families, especially children, she didn’t plan a career in politics, and yet, that is a path she stepped onto.

As mayor, her focus continues to be to promote a strong, safe, resilient county and a thriving economy where opportunities are truly inclusive while simultaneously protecting the environment. In closing, she reiterated her commitment. “I am always working collaboratively with all of you to navigate the storms we face.”

Commissioner Raschien then posed a different question to each panel member. Symeria Hudson, President and Chief Executive Office (CEO), Chapman Partnership, spoke of years in the corporate world, to include international work. One of the best lessons she learned was how in operating successfully at that level she lost much of herself in being groomed by many to match their profile of what she “should be like”.

She moved into non-profit work where her honed skills are used to carry out responsibilities for overseeing the strategic programmatic, financial, and managerial operations of the organization that runs two homeless centers and myriad support programs. Chapman Partnership is nationally known as a model to emulate.

“No one ever again tells me I’m not good enough as myself,” she said.

The question of having the opportunity to develop the next generation was easy to answer for Luisa Santos, District 9, Miami-Dade County Public Schools (M-DCPS) School Board Member.

“I get to do this every day,” she said, referring to Millennials and younger individuals.

“I teach them their trials and tribulations are their strength.”

The eight-year-old girl who came from Colombia with her parents much later learned she was undocumented. She persevered, however, through multiple obstacles to gain U.S. citizenship, attain a position with the President, Miami-Dade College, become founder and owner of acclaimed Lulu’s Ice Cream, and was most recently elected to the School Board.

Yesenia Rua is Senior Regional Manager AHS Residential, LLC. In asking about what qualities and skills are important in a leader, she drew on her range of responsibilities. Twenty years of experience in property management led to her position where she oversees all properties of the region and operations including financials, performance, and supervision of site staff and managers.

“You have to love what you do,” was part of her response. “You need to be connected, have faith, be persistent, and know when to let go.”

She compared it to parenting skills in having patience and strength.

Stacy Miller, Secretary, Florida Department of Transportation (FDOT) District Six, has been with the Department for thirty-one years, progressing from Professional Engineer Trainee, through design engineer, to project management. FDOT was very much a male-dominated organization in the 1980s and 1990s, and she reluctantly moved out of her engineering comfort zone when a supervisor insisted she apply for a new office being established. She accomplished more than becoming an expert about intricacies of financial and resource aspects of multi-million-dollar state road projects. She also learned her efforts were acknowledged at the state level where the office she developed was to be replicated in other districts. She gave that example to the question of, “At what point in your career did you embrace being the boss lady?”

With time for only a few questions from the floor, all four panelists and the Commissioner responded quickly about who has been the guiding influence in their lives. “Grandmother, mother, grandfather, mother, and father,” were their family members who provided principles to live by, inspiration, encouragement, and support.

Rousing applause gave way to the final items on the agenda. Soria asked Dr. Oscar Loynaz, Miami-Dade College, Homestead Campus, Victoria Tomas of Florida International University, and Andrea Ward, Southeast Regional Director for NAWIC to come forward. They were each presented a check of $500 to be applied to their respective scholarship funds. Checks were provided from the Miami NAWIC chapter.

previous
South Florida is on the front lines of climate change. Now MDCPS plans to hire a sustainability officer
next
Luisa spoke with CNN regarding the Human Reproduction and Disease Education curriculum materials