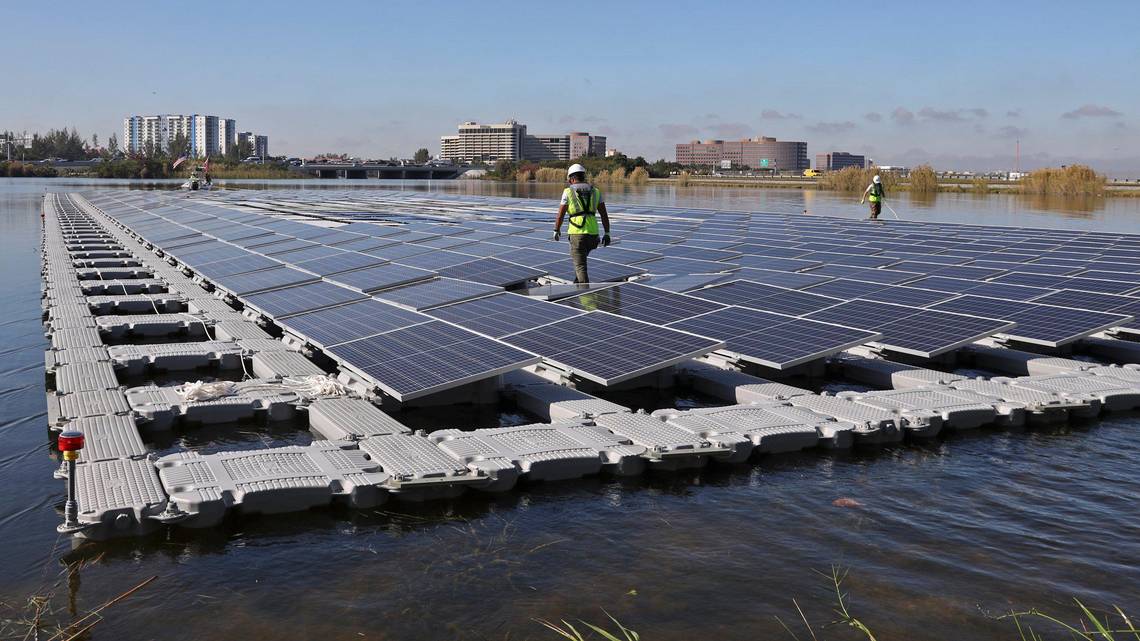 Miami-Dade County, the fourth-largest school district in the nation, became the first Southern school district to commit to an ambitious goal: switching to “clean energy” entirely by 2030.

The resolution didn’t define clean energy, but traditionally that means switching away from fossil fuels in favor of renewable energy, like switching to electric buses and more schools powered by solar energy.

Still, the resolution represents a victory for parents and students who developed and pushed for the proposal, passed unanimously with no debate in a Wednesday school board meeting.

Tora Bueno, a “climate parent” who advocated for the 100% clean energy proposal, called it a step in the right direction for a community at risk from about two feet of sea level rise by 2060.

“We’re not just relying on the federal government to take care of everything or even more nebulous, “science” or “tech billionaires,” she said. “We have to work on these things on the ground level.”

Their job is to conduct a review of current sustainability measures across all departments and develop recommendations and an implementation plan to be presented to the School Board by the February 2022 meeting.

Santos said the effort could save money that could be directed toward teaching and educational tools, and improve student health and safety. She said cutting down the district’s energy production by 30% produces $20 million in annual savings. That could fund 420 staff positions at a starting teacher salary, for instance, or 50,000 devices at $400 per device.

“There are serious savings for us to consider here,” Santos said.

School Board members discussed the proposal at committee meetings last week. Some board members, like vice chair Steve Gallon and Christi Fraga, were in favor of the initiative but hesitant to commit the district to an aspirational goal. They joined board members in co-sponsoring the item.

Santos said some initiatives won’t be realized by 2030, but that the policy will outline which things must get done and what will take longer, like electric vehicle fleets and zero carbon emissions.

The school district recently received a grant that lowers the up-front cost of diesel-free buses. Chief Financial Officer Ron Steiger said the grant allows the district to buy 50 electric buses, which are worth two to three times more than at the price of a regular gas bus. The grant also lays out infrastructure to install charging stations at bus depots.

In Miami alone, only 24% of the energy it received from Florida Power & Light in 2018 was from renewable sources, largely from the Turkey Point Nuclear Generating Station. Only 1.8% was from solar, and the rest was mostly natural gas.

FPL’s planning documents show it only plans on upping that solar figure to 16% by 2030.

To get the rest of the way there could depend on federal policy. President Joe Biden signed an executive order requiring a “carbon pollution-free electricity sector” by 2035 but hasn’t released details on how that might happen.

Powered by the sun

A big part of that conversion to clean energy may come from solar power.

That same report also found that nearly all solar in schools is funded through something called a power purchase agreement, where a third party (either a utility or solar developer) installs, owns and operates the solar panel system. The school buys the energy from the provider at a cheaper cost than energy from the grid.

Power purchase agreements are illegal in seven states, including Florida. Two bills to change that — one filed by Democrats and one filed by a Republican — never made it out of committee in Tallahassee this year.

Thomas Bruley, a junior at MAST Academy with a passion for climate action, started a petition two months ago to encourage the state to allow PPAs, in hopes of seeing more solar power on schools like his. He gathered over a thousand signatures.

“We’ve been using nonrenewable sources of energy for centuries and we’ve seen how it impacts our earth. I feel like we really need to step it up and change now,” he said. “Florida is in grave danger.”

Despite the failure of both bills that would enable PPAs, Drucker said the district has other things to focus on while politicians keep trying to change the law.

“All the facilities officers I’ve spoken to say you have to eat your energy efficiency vegetables before you get your renewable energy desserts,” she said.

The district spends about $65 million a year on electricity. Tablan and some university researchers calculated that if the district installed an average-sized solar system (250kW) at every school using a PPA, it could save $13 million a year, minus the upfront cost of buying and installing the solar panels.

If PPAs were legal in this state and the district could skip the upfront costs and just buy cheaper energy, Tablan’s calculations show it could save around $3 million a year.

“School districts across the county are reinvesting millions in saved energy bills into teacher salaries, laptops, and repairs,” she said.

Before the coronavirus pandemic, Superintendent Alberto Carvalho teased a public-private partnership that would install solar panels on district property. That would make the school district one of the largest solar farms and could power the district independently while selling excess power for profit.

A test case for that idea was also on Wednesday’s agenda for school board approval. Florida Power & Light won a bid to install an aluminum-covered walkway canopy structure with fully sealed bi-facial photovoltaic panels functioning as a student drop-off at MAST @ FIU, the magnet maritime and technology-oriented school at FIU’s Biscayne Bay campus.

FPL will own and maintain the installation for 15 years, after which the district will gain ownership of the system and the electricity generated by it.

“That’s the kind of solution that we hope to replicate,” Carvalho said. “It’s not been that easy to realize the goal that we had but we’re very happy that we delivered on the very first one.”

The goal, he said, is to replicate that model. Carvalho said that plan is aligned with Santos’ proposal.

“I think that for our children’s sake it ought to be possible considering the trend lines we are aware of and the quality of life they depend on,” he said.

Elisha Moultrie, the environmental and climate justice chair for Miami Dade Branch NAACP, said providing more solar power for schools can make the communities around them stronger and better prepared for disasters.

In Miami-Dade, schools serve as most of the county’s hurricane shelters. With solar panels and batteries, the shelters could stay cool and functional even after a storm. Or it could serve as a cooling center during a heat wave for people who don’t have air conditioning in their homes.

“We advocate for making sure the vulnerable population is able to prepare and be ready for natural disasters,” she said. “We want to build a more equitable society.”