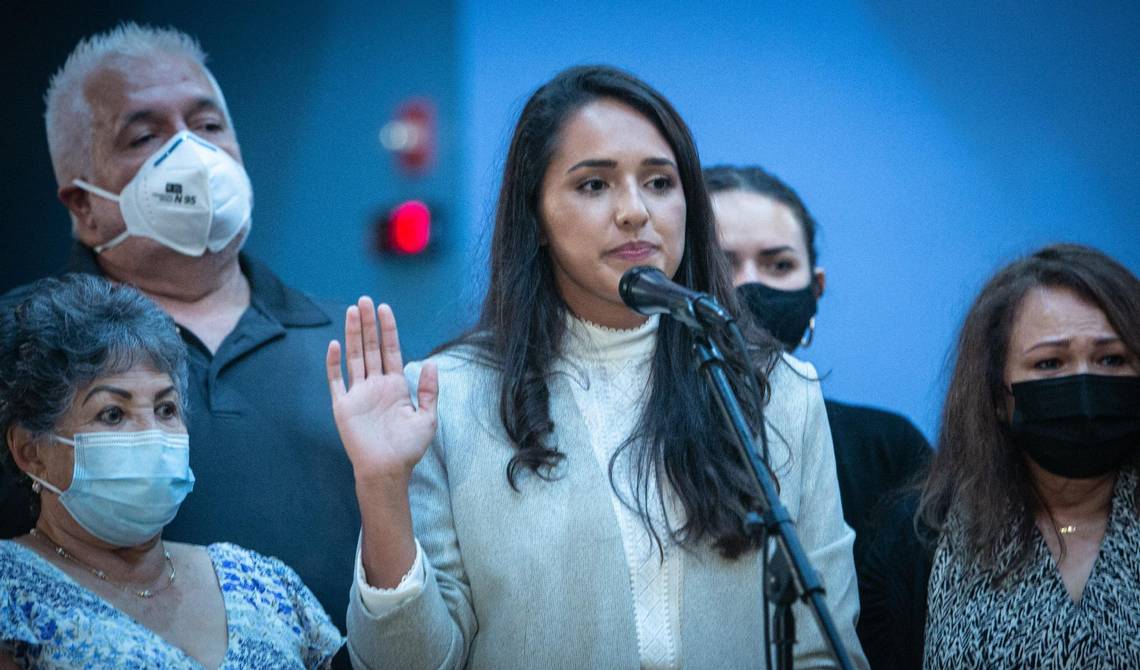 Despite the episode, he said Tuesday night that he expected to be released from the hospital and serve on the dais at Wednesday’s regularly scheduled meeting.

Gallon, 51, who represents the county’s northernmost district, had just wrapped up his speech when he passed out around 10:30 a.m. and fell to the floor.

Moments before, while delivering his remarks, he’d complained about his voice becoming hoarse, and he’d grabbed a bottle of water. Minutes earlier, he’d been sworn in by his daughter, while his granddaughter stood by his side.

After he fell, people gathered around to offer aid before paramedics arrived. The district’s live webcast of the event then went to a cartoon.

A Miami Herald reporter texted Gallon, who was first elected to the School Board’s District 1 in 2016, asking if he was OK, and he replied, “Yes.”

Superintendent Alberto Carvalho addressed the meeting shortly after an ambulance took Gallon to the hospital and said his family told him, “He is alert, conscious and he wants to be here. So, that is all very good news.”

Gallon’s condition wasn’t immediately clear, but he was well enough to call in to the meeting from the hospital at 12:43 p.m. to vote along with eight of his colleagues for the reelection of Perla Tabares Hantman, 80, as chair of the 10-member elected board.

“Hello, are we nominating for chair?” he asked over the speakers at the auditorium to applause from those in attendance.

In a text to the Herald Tuesday night, Gallon said he was “checking out shortly” from the hospital and would be at the board’s meeting Wednesday.

“I’m moved by the tremendous outpouring of prayers, support, and concern extended by so many. I am blessed to prepare to return to work and service tomorrow and continue to represent District 1 and [Miami-Dade Public Schools] tomorrow at our regularly scheduled School Board meeting. We have much work to do.”

His colleagues in turn reelected him as vice chair of the board. The vote was 8-1. Board Member Marta Perez voted against both Gallon’s and Tabares Hantman’s nominations, she said, not because she did not support them, but because she believes the positions should be rotated yearly.

“All constituents should have the opportunity to have their School Board member as chair,” Perez said.

This was the 13th time Tabares Hantman, the first Hispanic woman to serve as board chair, has been selected by her colleagues to lead on the dais. She was first elected to represent District 4 in 1996.

“It is a pleasure to call all of you colleagues,” she said.

Tuesday’s meeting also marked the first for newly elected School Board members Lucia Baez-Geller, Christi Fraga and Luisa Santos. With their election, the only man on the nine-member board is Gallon, who won this year’s election with no challengers.

Baez-Geller, 37, a teacher at Miami Beach Senior High for the past 15 years, will represent District 3, which includes Northeast Miami-Dade County, down to the beaches and a small portion of downtown Miami.

“It is my goal as a School Board member to unite us as one community,” she said Tuesday.

Fraga, 33, an ice cream shop owner who previously served for eight years on the Doral City Council, now represents District 5, which includes Doral Miami Springs. She said the initial challenges for the district will be making sure teachers and students navigate the rest of the school year amid the COVID-19 pandemic, which is surging in Florida and Miami-Dade County.

“This is not the first time this community has faced financial challenges and difficult decisions, and it won’t be the last,” Fraga said.

Santos, 30, also an ice cream shop owner, discussed moving to the United States at 8 years old from Colombia “because my parents thought that the promise of a public school education in Miami-Dade would be worth leaving everything they had built in another country. And they did that. They came here, and I landed, by luck in South Dade, where Perrine Elementary, Southwood Middle and Coral Reef Senior High changed my life.”

In high school, while filling out a required form to start a mentor program for middle schoolers, she found out she was undocumented.

“But in our K to 12 system, that does not matter. Our K to 12 system sees the potential of every child,” said Santos, who soon after her discovery applied for and was granted citizenship and went on to graduate from Georgetown University.

“And, that belief and opportunity that was created in our schools is what I fight so hard to carry, to build on, to contribute to and to realize and make possible for the hundreds of thousands of students that are in our classrooms today.”