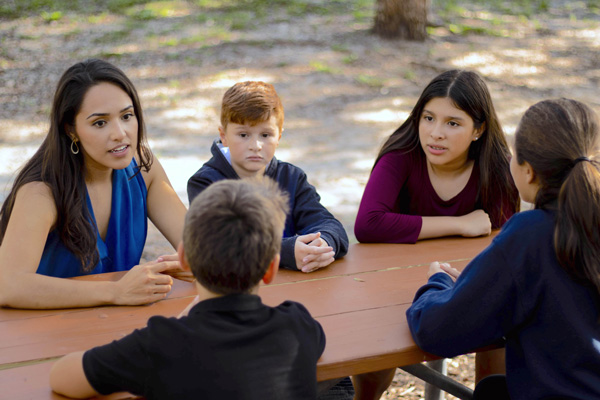 When she was eight years old, her mother brought her and her sister to Florida to start a better life. It was 1998, and at her young age, she felt for the first time the freezing cold of air conditioning at school safe from Miami’s weather—very different from that cold she felt in rainy Bogotá, Colombia, where her family comes from.

Since her arrival in America, Luisa has always had a special bond with the school system. “In fact, my mother decided to stay undocumented so my sister and I could have a much better education in Miami than the one I could get in Colombia,” she recalled.

For her, to be immersed in an educational system with special programs such as dance clubs, with teachers who invested a lot of time and dedication, was the breaking point to advance and focus her professional future. At Coral Reef Senior High School, she became very involved at district and state levels in different organizations such as Future Business Leaders of America, or the PTSA (Parent Teacher Student Association). “I went to Tallahassee several times to speak with our representatives in search of support for public schools,” she said

Ironically, while a junior in high school, she realized for the first time that she was an undocumented immigrant. “At the time, many doors were opening for me with organizations that I was involved in, but I could not travel because I didn’t have a valid ID.” However, she was able to start her academic life at Miami-Dade College and became president of the student government. “I wanted to volunteer; I wanted to give my time back to the college because they let me enroll as an undocumented student when it was impossible with other universities.

For Luisa, public schools are the institution through which this country provides equal opportunities to everyone, regardless of their legal status, race, gender, social class, or religion. “It is important to keep that promise we made as a country because this freedom is what has made the United States a world power. Part of that premise has been lost; however, we must return to that path and provide quality education to all children.

Her family’s petition for citizenship took them 18 years, but today she is proudly an American citizen. Her permanent residence arrived in perfect timing with a scholarship granted from the Miami Foundation to study at Georgetown University, where she graduated with a degree in political economy, and a minor in education, inquiry, and justice.

When she was in Washington, DC, her entrepreneurial spirit led her to start a business. During her senior year at Georgetown, Luisa discovered liquid nitrogen’s potential and launched Lulu’s, her own nitrogen ice cream brand.
In May 2015, she decided to bring Lulu’s to her hometown and opened her first shop in downtown Miami. Currently, she has ten employees, including her family and several local students, who are trained in personal finance and social entrepreneurship

Despite her success as an entrepreneur, Luisa has never neglected her passion for education or her need to advocate for change in her community. She firmly believes in education as the great equalizer, and that all students should have the opportunities she had that led her to success.

To fulfill this promise, she thinks the state must provide quality education. That’s why she decided to run as District 9 candidate for the Miami-Dade School Board. “I believe that my experience living in this community, being a student all my life in Miami-Dade, in addition to having a degree in education and my business experience, gives me the potential to address issues and help create the school district we want, where each kid must have access to a high-quality education,” she said.

Luisa understands the obstacles that our community lives every day. Her life experience, leadership and strength to pursue her dreams give her the likelihood of being a spokeswoman, taking on the challenges that arise in the school system. “We need leaders with energy and creativity, who use innovation and entrepreneurship within the school district to serve students and to allow them to reach their full potential,” she concluded.